Staff member
From the publisher, quote;

"Periods of political and social conflict tend to be the perfect breeding grounds for innovative fiction. 1970s Britain, with its all-too-frequent States of Emergency, saw television script writers respond creatively – to both the general sense of doom and a growing public desire for cultural change – across a wide range of genres: sci-fi, cop shows, political drama, sitcoms, anthology series, action-adventure, and children’s drama among others. Amidst the social and political unrest, it would prove to be a remarkable decade for television, as colour TV made its way into increasing numbers of households, and the three television channels produced an impressive range of iconic series which frequently challenged the status quo.

Survival TV explores a wide range of television series, including Doctor Who, The Tomorrow People, UFO, Space: 1999, The Guardians, 1990, Shadows of Fear, Thriller, The Sweeney, Survivors, Blake’s 7, The New Avengers, Zodiac, The Fall and Rise of Reginald Perrin, Terry and June, Butterflies, The Persuaders! and popular US imports. In a divisive decade, millions of viewers were ‘sharing’ these shows and television sometimes appeared to represent the main social glue." 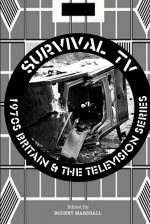