Staff member
Released two weeks later than the scheduled July 14th expected date the final installment of Titan's popular Doctor Who Comic #2 is now out. Written by Jodie Houser this four-part series brings back the third Doctor as portrayed by the late and great Jon Pertwee, the not oft now seen Peter Capaldi's twelfth and of course Michelle Gomez's Missy and the late Roger Degado's famous Master. 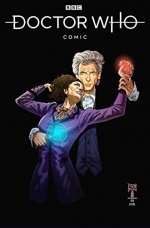 This series can be ordered from Titan's distribution partners via their website here;