Quote; "Geoffrey Beevers reads an exciting novelisation of a classic TV adventure for the Fourth Doctor.

The Doctor and Sarah arrive safely back on Earth or do they? Why does the mysterious solder march straight over a cliff, and then reappear unharmed? Why are they attacked by sinister mechanics with built-in guns for hands?

Why is a picturesque country village at first deserted, then filled with mindless zombies? And why are the Doctor and Sarah's best friends trying to kill them?

Will they be in time to defeat the deadly Kraals and their terrifying android invasion of Earth?

Geoffrey Beevers, who played the Master in the BBC TV series, reads Terrance Dicks's novelisation of the 1975 TV serial by Terry Nation." Unquote 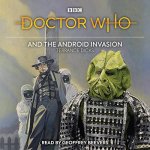 This new release is now available at retailers in CD-Rom format as well as for online streaming.