Staff member
In a long overdue and delayed event BBC has finally released Bessie Come Home by Paul Magrs as the second release in their 'Beyond the Doctor Series' that was preceded by The Kairos Ring in Feb of 2021.

Future releases include London, 1965 and Sleeper Agents, also by Paul Magrs and due in early 2022, while originally scheduled for 2020 and 2021. This release has raised controversy as it is only available by Audible which is owned by Amazon accused of being a monopoly operated by Jeff Bezos. While the release has been delayed for over two years, consumers are still discussing a boycott of the release due to it's only available option, Audible by Amazon. Most booksellers have now dropped the title due o the exclusive and early release which in actuality is a release that was originally scheduled for 2019. 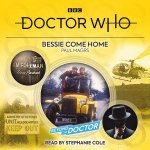 Outpost Gallifrey does not support or provide links to illegal monopoly operations such as Amazon's Audible as their non-competitive exclusive releases of material are deemed to harm publishers and authors.