Staff member
The BBC has announced that Doctor Who will return to screens in the UK and in the USA on Sunday 31st October.

The thirteenth series, since the return of the show in 2005, will debut on BBC One in the UK and BBC America in the states.

The six episodes will all be grouped under the title Doctor Who: Flux and star Jodie Whittaker in her final series as the Doctor. 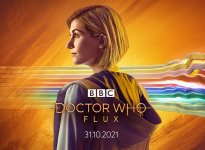