The Edge of Reality Update

One of the updates to The Time Scales will include the ability to post updates to reviews when opinions may change over times. Here is a prime example of when that new feature would come well into play now, with this game that was just released.

In my review the day this game was released, I expressed some disappointment in relation to two issues;

1) The Soundtrack was not included as advertised.
2) The game arbitrarily selected one of my two video cards without giving me a choice.

Well, as if Maze Theory had read my review, guess what's been fixed with todays update? 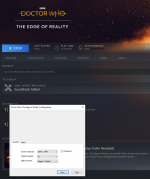 Two things have been updated.

1) The Soundtrack has now been added
2) There is now a popup window on launch that allows a PC gamer to select which video card and monitor they would like to use.

Highly unlikely that they read your review on here of all places, FYI the soundtrack was included as advertised and was very easy to find from the get go.

Actually the Soundtrack was not included with the original download which is why the update says "SOUNDTRACK ADDED".

You see that right?

One thing The Time Scales always lacked was interaction in relation to reviews. This forum serves as a cross between for now.

I guess I should give you an example.

Kamelion said:
Who are 'they'?

Actually the Soundtrack was not included with the original download which is why the update says "SOUNDTRACK ADDED".
Click to expand...

Maze Theory
Actually it was. Just because you couldn’t find it doesn’t mean it wasn’t there, I bought it myself before this patch just for the music and it was very easily found, hell you can ask Maze Theory directly on their discord. It was there from the start.

Actually the original release did not include the sound track. That is why the update says 'SOUNDTRACK ADDED'.

If you can't figure that out, I guess you're just being a dick, which is mildly amusing in itself.

Actually it did. Even people with review copies of the game confirmed that the soundtrack was there upon release.

If YOU can’t figure that out, then well you’re just a dick.
D