In an exclusive interview, she talks about what it’s like acting alongside Fifteenth Doctor Ncuti Gatwa, and how she discovered she’d secured the role:

Other highlights of the new issue include: 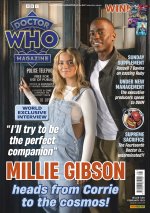 Available now at your favorite bookseller and digitally from Pocketmags.