"Maureen O'Brien reads an action-packed original adventure for the Twelfth Doctor, as played on TV by Peter Capaldi.

When Professor Irene Hyde's Monday morning lecture at St Luke's University is rudely interrupted by a man named the Doctor, it's the beginning of an adventure she could never have dreamt possible.

Soon they are hurtling backwards in time to 1806, where the crew of the trading ship Favorite, led by the 'Ice King' himself, Frederic Tudor, are being picked off, one by one, by a hideous monster that lurks in the shadows.

A head frozen in ice provides a further complication to matters, as the robotic Nekkre awakes determined to vanquish all-comers. With the Doctor seriously weakened, Irene must tap into hidden reserves of courage if they are to have any hope of returning to 21st Century England... 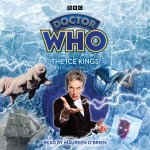