The TARDIS crewmembers have taken a break from their adventures and are enjoying a well-deserved rest in a luxury villa.

But, in the gory grandeur that is Imperial Rome, things don't stay quiet for long. If the time travellers can save themselves from being sold as slaves, assassinated by classical hit-men, poisoned by the evil Locusta, thrown to the lions, maimed in the arena and drowned in a shipwreck, they still have to face the diabolical might of the mad Emperor Nero.

As if that wasn't enough, they also discover that, although Rome wasn't built in a day, it burnt down in considerably less time... 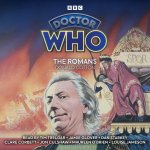