Staff member
Fans of the Big Finish Series, The Robots from the Worlds of Doctor Who have reason to celebrate today with a trio of new tales. The blurb goes like this, quote;

"During the events of Doctor Who: Ravenous 2, Liv Chenka left the Doctor and the TARDIS behind. Just for one year. A year during which she would live on Kaldor, and get to know her sister Tula all over again.

But Kaldor is going through a period of tumultuous change. Technology is changing at an advanced rate - the robots are evolving, artificial intelligence is adapting, and with these changes so politics is altering too. Dangerously.

Can Liv and Tula make a difference during the most turbulent time in the world’s history?

5.1 The Enhancement by Aaron Douglas
The Enhancement chips are the next stage of personal security for the citizens of Kaldor - and following her experiences with identity theft, no-one is keener to get involved with them than Tula. Liv, however, has other concerns. The Sons of Kaldor have been suspiciously quiet. But is this something to be worried about? Or is the true threat much closer to home?

5.2 Machines Like Us by Phil Mulryne
Kador Arris of the founding families used to work for the Company - but now he’s on the outside and demanding greater accountability. His populist plans are gaining momentum - but also gaining him enemies. A terrifying conspiracy is underway - and only Liv and Tula are in a position to stop it.

5.3 Kaldor Nights by Tim Foley
Kaldor Nights is the most popular reality tv series on the planet... and it now has two new people on set. As danger approaches outside, Liv and Tula are there to ensure the show must go on. Because it’s just tv isn’t it? There can’t be anything sinister going on... can there?" Unquote 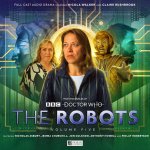 This new release is available on collector's edition CD as a box set and for instant download from the speedy Big Finish website here;