Staff member
The Doctor Who Appreciation Society has released a unique new anthology of non-fiction stories written by a multitude of who's whos of the Whoniverse. This new book directs proceeds to the RSPCA, the Royal Society for the Prevention of Cruelty to Animals. The webpage for this new title is here:

It is described as, quote;

"Join actors, writers and production crew from the world of Doctor Who as they relate moving and hilarious stories about their own very special pets in our latest publication, Pets In Time.

The book includes contributions from:

To buy visit our online store at: https://dwas-store.sumup.link/" Unquote 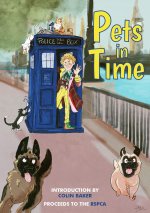