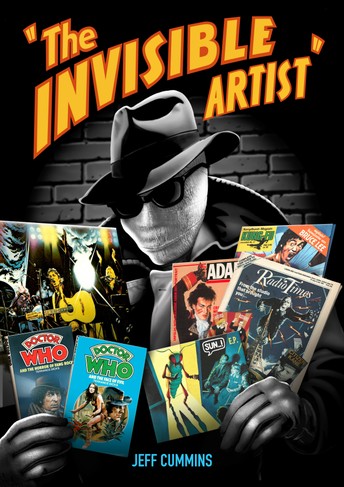 The Invisible Artist by Jeff Cummins

Since 1976, Jeff Cummins has been a prolific artist on many book covers, album covers, and posters. He thinks of himself as the invisible artist due to the fact that much of his work, although known – and out there, most people are unaware that it was Jeff who did it.

He is well-known for his work on the Target novelisations of the 1970s/1980s, most notably The Face of Evil, The Three Doctors and Horror of Fang Rock, as well as cover art for several of the New Adventures of the 1990s, including the seminal Dimension Riders and Conundrum.

Not only does this book cover his Doctor Who work, inside you’ll also find stories of The Beatles, of Paul McCartney and his wife, Linda, you will discover the role Jeff had in the marketing of the blockbuster film Back to the Future, painting such artists as Eric Clapton, Yes, Blondie, (and like Chris Achilleos), Whitesnake… and so many more. If a pop/rock artist was popular in the late’70s/early-80s, the chances are you’ll find them in The Invisible Artist.