3.1 The House That Hoxx Built by Tim Foley
When the Third Doctor and Sarah journey far into the future of Earth, the last thing they expect to find on the planet is a haunted house!

Invited to dinner by the Hoxx of Balhoon and his ovine ward, the TARDIS travellers experience strange and disturbing phenomena, and the Doctor is determined to discover the cause...

3.2 The Tivolian Who Knew Too Much by Robert Valentine
Taking an Italian holiday, the Fourth Doctor and Leela encounter another tourist very far from home. Timble Feebis is a particularly timid Tivolian, but he has much to be fearful about!

Guarding a vital data-chip, the three visitors are soon caught up in the machinations of a crime boss and his gang, and a dangerous alien assassin…

3.3 Together In Eclectic Dreams by Roy Gill
The Sixth Doctor takes companion Mari to the Archipelago of High Dream to try and stop the nightmares she’s having in the TARDIS.

Instead, they find the Lethe Foundation, a research facility overseen by musician Tara, lulling her clients to sleep with soothing melodies. But the Kantrofarri are hunting, and a mystery Green Man holds the key to escape…

3.4 If I Should Die Before I Wake by John Dorney (from a story by Jacqueline Rayner)
The Eighth Doctor and Charley are lost – in a labyrinth of monsters. And somewhere, lurking, are the Dream Crabs…

From the Sphinx to Gorgons, Cerberus and Pegasus, the Greek myths are alive and threatening the TARDIS duo with death at every turn. How long until their Fates unravel, and the truth is revealed?" Unquote 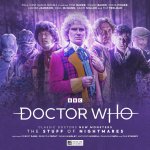