Staff member
Fans of Alex Kingston and River Song have reason to dance in the streets today with the release of The Diary of River Song Series 10: Two Rivers and a Firewall.

From the Big Finish site, I humbly quote,

"Professor River Song returns in four new adventures. She encounters royalty, killer robots and her own, occupied tomb, before being reunited in the digital afterlife with Proper Dave.

10.1 The Two Rivers by Tim Foley
River Song finds herself on an irresistible mission - investigating the tomb of the legendary River Song! Except the statues don't resemble her and the tomb contains the body of someone very different... or does it?

10.2 Beauty on the Inside by Lizzie Hopley
It would seem to be a perfectly ordinary painting of a forgettable royal family - so why did a biochemist smuggle it out of a closed colony at the cost of her own life? River is determined to find out.

10.3 Black Friday by Lauren Mooney and Stewart Pringle
Omnia Forum might just be the greatest shop in the galaxy and it’s celebrating two hundred years at the heart of the retail sector. But when River attends the celebratory gala she finds it less ‘everything must go’ and more ‘everything has gone’… apart from the Autons.

10.4 Firewall by Barnaby Kay
River is living her dream life with her dream husband. But every paradise has a serpent and this husband might not quite be up to the task." Unquote 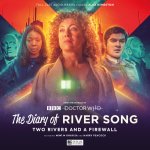 This spanking fresh and new quartet of tales may be found now on collector's edition CD-Rom as well as for instant streaming from the speedy Big Finish site for it, here: