Staff member
With a late night surprise rerelease of an extremely rare full cast audio drama The Time Scales and Fine Line Productions producer Gareth Preston did in fact surprise the newest BBC Doctor Who author Will Hadcroft as can be seen on Twitter here:


https://twitter.com/i/web/status/1555454405784137728
Will Hadcroft is the author of the newest BBC Doctor Who Audio Originals story Doctor Who: The Resurrection Plant

Will Hadcroft worked for decades to become an official BBC Doctor Who author and he succeeded.

This full cast audio drama recorded in 2006 and originally released in 2022 has been rereleased on Youtube as part of a celebration with his friends online. The rerelease of this story was intended to be a surprise for Will Hadcroft and as seen on Twitter it obviously was.

Here are all three parts of The Chattath Factor by Will Hadcroft; 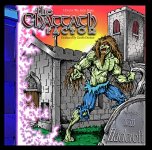