Staff member
From BBC, quote; "Jamie Glover reads this gripping novelisation of a classic TV adventure for the First Doctor.

The TARDIS materialises on a remote island, set in a sea of acid, on the planet Marinus. The Doctor, Susan, Ian and Barbara meet Arbitan, keeper of a vast computer which rules and balances the gentle life of Marinus. Yet peace on the planet is threatened by the sub-human Voord, who wish to take control of the Conscience.

Arbitan enlists the travellers to find the five crucial Keys of Marinus in various locations across the planet. Thus begins a series of terrifying adventures for the Doctor and his friends, who must find the Keys if they wish to ever to see the TARDIS again. 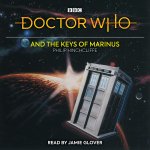