Staff member
The Time Scales has released a new interview which is described as part 1 of 2 with Doctor Who celebrity Gareth Preston.

Gareth Preston acted in several capacities for BBV Productions Doctor Who spin-offs. He wrote the Sontarans audio story Conduct Unbecoming as well as the direct-to-video comedy film Do You Have a License to Save this Planet?, in which he also appeared as a delivery man. He also was multi-functional for the comedy tale Auton Diaries, in which he served as the lead. Preston has since then worked on various projects with Westlake Films and Darker Projects. 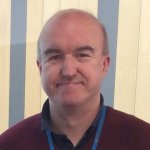