Staff member
The latest and final (for now?) release in the popular Dalek Universe series with David Tennant reprising his role as The Doctor, is out now.

Quote"
This title was released in October 2021. It will be exclusively available to buy from the Big Finish website until 31 January 2022, and on general sale after this date.

Lost in a universe before the Time War, the Doctor is still struggling to find a way back home... but has only found himself in the middle of another war. A very familiar war, involving his oldest enemies – and their malevolent creator.

However he’s not alone – as there are old friends here too. At least he thinks they’re old friends... but when the stakes are as high as this, can he really be sure who to trust? What side are they truly on?

3.1 The First Son by Lizzie Hopley

The Doctor’s attempts to return home have led him to the middle of a war zone... and a familiar voice.

The travellers have arrived on a planet made up of crashed space-ships where they encounter River Song... Or do they? Because she’s dressed as a Movellan and claims to be a member of that robot race. Is she undercover, a duplicate, or something more sinister?

And more importantly... who is her son?

3.2 The Dalek Defence by Matt Fitton

The Doctor and Anya are trapped between battling Dalek and Movellan forces and only the intervention of Earth can get them out of trouble.

But the humans have troubles too – and a very familiar prisoner. Davros.

Stuck in a universe before the Time War, the Doctor is bound by the rules of his own past... Can he keep everyone alive without changing history? And would he even want to?

3.3 The Triumph of Davros by Matt Fitton

Returning to a familiar planet, with Movellan and Dalek warships floating in the sky above, the stakes for the time-travellers are higher than ever.

The mistakes of the Doctor’s past are coming back to haunt him. Alliances are made and broken. And the course of the war is about to turn.

The Doctor can’t stop what’s coming. But maybe, just maybe... he may be able to save his friends.

This boxset release contains all three stories, plus additional behind the scenes interviews." Unquote 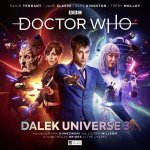 This new set of stories are available on collectors edition CD-Rom, Vinyl LP and for instant download from the speedy Big Finish website here: