"“I think that the relationship between Jenna and Peter was fantastic.”

After working as an Assistant Director, DEREK RITCHIE made the move to the role of Script Editor at BBC Wales where his credits include WIZARDS vs ALIENS and DOCTOR WHO. During this time, he had the privilege of working on THE FIVE(ISH) DOCTORS and PETER CAPALDI’s first series in the role of The Doctor. All the while not quite believing that any of this was actually happening to him!

He was then given the opportunity to produce the third series of WIZARDS vs ALIENS, which then led to producing DOCTOR WHO and its spin-off CLASS. As a lifelong fan, this was a dream come true, and one which launched him as a freelance drama Producer.

On leaving BBC Wales, he has continued to work on thrilling genre shows such as LUTHER and THE CAPTURE.

DEREK is interviewed by lifelong friend ROBERT DICK at the MYTH MAKERS LIVE event in March 2022." 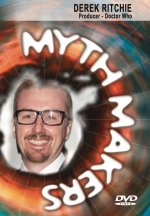