For the last nine years Kates life has been a happy one. Other than a minor blip in 2003, she hasnt had to worry about aliens bothering her or her son. Indeed, her biggest concern is Gordys first girlfriend. But it all changes when a face from her past appears, bringing with him a warning.

Gordy and his cousin Conall are kidnapped by a radical group calling themselves the Followers of Maitreya!

The Brigadier and Kate join forces with Douglas Cavendish and Anne Travers on a mission to save Gordy and Conall, which leads them to the ruins of Det-Sen Monastery in Tibet where deadly Yeti roam, and a prophecy is about to fulfilled!

What connects the Followers of Maitreya to a developing online school, Asteroid 4179 which is heading towards Earth, and the Brigadiers family?

DOWNTIME: CHILD OF THE NEW WORLD IS NOT COVERED BY ANY SUBSCRIPTION OFFER.

In co-ordination with Reeltime Pictures, Downtime: Children of the New World is a sequel to their straight-to-video film, Downtime, which introduced the Doctor Who world to the Brigadiers daughter, Kate Lethbridge-Stewart.

Set in September 2004, Downtime: Children of the New World picks up the story told in Downtime, which saw the Brigadier and his daughter join forces with Doctor Who companions Sarah Jane Smith and Victoria Waterfield to defeat the Great Intelligences plan of world domination through New World University. Although a sequel, the novel is intentionally written to stand on its own.

THIS IS A LIMITED RELEASE.

Limited hardback edition for £25 (+ p&p). This edition will exclusively include an artwork postcard signed by Andy Frankham-Allen, a foreword by original Kate Lethbridge-Stewart actor, Beverley Cressman, as well an aditional chapter (not featured in the paperback). Added to this, everybody who buys the hardback will also get a free Lucy Wilson story entitled The Lucy Wilson Mysteries: Back in London.

*Must be read after Child (sic) (Children) of the New World." Unquote 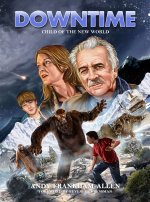 This new hardback may be ordered from the Candy Jar Store page here;

Now available to review on The Time Scales here;