"This year's festive special, Eve of the Daleks, will premiere on BBC One at 7:00pm on New Year's Day. 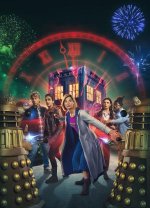 The BBC's guide to the Christmas line-up reports:

The Thirteenth Doctor (Jodie Whittaker) and friends will kick-start 2022 with an action-packed spectacular episode set to air on BBC One on New Year’s Day. The festive special will feature guest stars Aisling Bea (This Way Up, Living With Yourself, Quiz), Adjani Salmon (Dreaming Whilst Black, Enterprice) and Pauline McLynn (Father Ted, Shameless).

Sarah (Aisling Bea) owns and runs ELF storage, and Nick (Adjani Salmon) is a customer who visits his unit every year on New Year’s Eve. This year, however, their night turns out to be a little different than planned…

The festive episode is the first of three Doctor Who Specials airing in 2022. The second Special airs in Spring and Jodie’s final feature-length Special (in where the Thirteenth Doctor will regenerate), will transmit in autumn 2022 as part of the BBC’s Centenary celebrations.

Doctor Who is a BBC Studios production for BBC One and a BBC America co-production. BBC Studios are the international distributors for Doctor Who.
Speaking about festive treats in general, the BBC's Chief Content Officer Charlotte Moore said:

Christmas 2021 is a time to reunite with friends and family once more, and this year’s line-up of must-see shows will bring everyone together to share the festive season on the BBC. There’s a stocking full of special programmes to enthral and enchant featuring your favourite stars and characters, whatever your mood. The BBC is the place to be entertained this Christmas and New Year.


Focussing on the show itself, the BBC have released a number of interviews with the cast and crew:

Interview with Jodie Whittaker (The Doctor):
What can audiences expect from Eve Of The Daleks?

I think the festive special is a wonderful high octane contained story, so if you haven’t seen the series, including the Flux, you can start this episode and be taken on a rollercoaster through a scenario where the Doctor, Yaz and Dan are stuck in a time loop. Not only are they stuck in a time loop, they’re being pursued by the Doctor’s biggest enemy, which is the Daleks. For the Doctor it is her worst scenario.

This is all set on New Year’s Eve and we’ve two fantastic guest stars, Aisling Bea and Adjani Salmon who are not only hilarious but also wonderful actors that provide so much energy and brilliant chemistry. Audiences can expect lots of comedy, lots of fun, high stakes, huge amounts of jeopardy and an energised rollercoaster ride.

Can you introduce us to Sarah and Nick? How was it working with Aisling Bea and Adjani Salmon?

In the New Year’s Day special we were really lucky to work with Adjani Salmon and Aisling Bea. I had met Aisling before - and had never met Adjani - so I knew how lovely Aisling was going to be and how hilarious she is! My first introduction to Adjani was when we did the read through on Zoom and he was absolutely hilarious and I couldn’t wait for his energy and Aisling’s energy, they’re so different and they complement each other so well. Because they’re both from a world of comedy which I’m not from or Mandip’s not from (but obviously John is!) it was like comedy gold dust just being on set with them, they were making us laugh the whole time. What they brought to the characters and what they brought to the episode was really fun, a lot of high energy, a lot of farce, high stakes in this very groundhog, Russian Doll environment.

What was it like filming this time loop story from an actor’s perspective?

From the actor’s perspective, filming a repetitive moment or the replaying of the same moment in time – the Groundhog Day sequences where we exit the TARDIS and you realise that time is playing a loop - it’s actually really fun to shoot because you end up shooting really quick. So because you set it up, you’re covering so many moments that it’s only slightly different. It’s a little bit tricky sometimes because it all does turn into one in your head and then you’ll turn a corner and realise you’re shooting a different moment and it’s unexpected.

I have to say being on set the episode feels like it’s going at a million miles an hour even though you’re hitting the same moment every time, so I found that fascinating. It was brilliant because it’s contained, it’s in one location, there’s a real brilliant use of comedy with the Daleks as well which was really interesting to do. But also there was just five of us the entire time and that was so much fun.

What was it like filming the scenes where you’re exterminated?

When I read this episode for the first time and in one of the opening moments get exterminated I genuinely thought, “Somebody has decided to write me out a bit sooner than I thought!” It’s brilliant to play because the first time, for the Doctor, it’s as if you’re grasping at those seconds and that realisation that it could be your last moment. And for you to be killed by a Dalek would be so horrendous! But then once you realise you’re in this time loop the anticipation of the pain and the fun that can be had with that... it’s the first time in my career I’ve died so many times in an episode, there’s always a first!

What makes the Daleks so frightening?

What makes a Dalek so frightening is no matter how many times you think you’ve defeated them they always come back. And it’s that never-ending game of tennis, terrifying tennis.

What makes the Daleks so frightening?

What makes a Dalek so frightening is no matter how many times you think you’ve defeated them they always come back. And it’s that never-ending game of tennis, terrifying tennis.

How has the Doctor and Yaz’s relationship developed since they first met each other?

I think what’s been great is the amount of time that’s played out, I think obviously (our) first season was in real time... but with season twelve and season thirteen what happens is we have these elongated gaps between seasons and the time spent away, like the months that the Doctor’s in prison. In this season, there’s the time where Yaz has absolutely no idea if she’s going to see the Doctor again.

So the Doctor has given Yaz a hologram of information and Yaz continually plays it as her one connection to the Doctor when they’re parted in time. I think what’s brilliant is that these two, have had out of everyone - for my Doctor - the most amount of time together. And so it grows from Yaz’s perspective from somebody who is finding her feet to leading and confidence. What the Doctor loves is seeing Yaz’s independence and confidence grow, but she never falters in always being there for the Doctor and vice versa as well." Unquote.

Looks like New Year 2022 includes Daleks from the get go.